Newton’s laws of motion work very well at low speeds compared to c, the speed of light. The theory of relativity on the other hand, explores the effects of motion at high speeds approaching that of the speed of light. Measurement of these effects depends on the frame of reference to which measurements were made. Thus, in order to describe the motion of any object, we must adopt a frame of reference from which to observe the motion. Earth is the most commonly used frame of reference where we assume it to be stationary and measure all positions of a moving object relative to some origin and set of axes fixed on Earth.


The central concept of this chapter is to understand that many different frames of reference exist and that the effects of motion will be seen differently relative to each of these reference frames.

The following video can be shown as a hook to introduce special relativity: 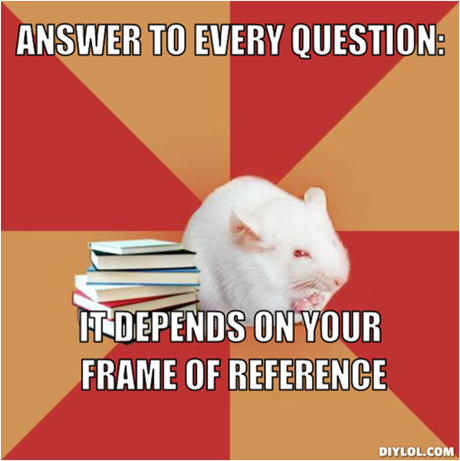 Science major mouse. Retrieved from http://www.weebly.com/uploads/1/6/3/2/16327360/1363487333.jpg
The following activity can be used to help students begin their study of special relativity:

To consolidate the lesson, have students jot down 3 things they have learned about reference frames today on an exit card.